How the Biggest Names in Music History Entered Retirement | AAG

How the Biggest Names in Music History Entered Retirement

Rock stars, they’re just like us right? Well, maybe not unless your day job takes you around the globe to perform in front of thousands of adoring fans day after day. One experience that many of the world’s most famous musicians can share with the rest of us, however, is retirement. Retirement comes in many forms in the music world, from long farewell tours to hastily-arranged one-off farewell shows. No matter what form these final performances take, the end result is always a performer stepping away from the stage (for a little while, at the very least).We here at AAG obviously care a lot about people in retirement, and that includes retired musicians. With that in mind, and with legendary artists like Elton John, Ozzy Osbourne, and Paul Simon embarking on retirement tours this year, we decided to take a closer look at the finales, encores, and more for some of the biggest names in music history.

First, we wanted to find which acts had performed some kind of final tour or show, so we looked at lists of the top performers in music history from a number of sources, including Rolling Stone magazine and a ranking of the most profitable artists in history, among others. From there we checked the career history of notable artists to see if they had performed a final tour or show, focusing mostly on those that had done so explicitly in name but also allowing room for those that did so in spirit, like the Beatles.

In all we found 24 of the biggest names in music history and collected data on their retirement tours, including the year or years those tours took place as well as the number of shows they performed. Those two pieces of information are collected in the graphic above.

Bands On The Run

While many artists chose to play one final show before calling it quits, some legendary acts took the show on the road for just a bit longer. Mötley Crüe signed a legally binding agreement preventing them from ever touring again with the Crüe name after the end of The Final Tour, which took place during 2014 and 2015. They made the most of their last hurrah, visiting 151 cities and playing 158 shows in that time!

That doesn’t quite measure up to Tina Turner, who made stops in 185 different cities while performing nearly 200 times in the year 2000 during what she continually called her “last big world tour.” While she did eventually put on another tour of that magnitude, she stuck to her word for eight years beforehand.

Both of those road warriors pale in comparison to Cher, however. Between 2002 and 2005, the diva’s Living Proof: The Farewell Tour included 297 tour stops and 326 shows all around the globe. The hard-working singer would eventually return to a national tour nearly a decade later in 2014, and can currently be seen in Las Vegas and Washington, D.C. as she performs concert residencies.

All three of those tours were massive financial successes, raking in $86 million for the glam metal legends in Mötley Crüe, $122.5 million for Tina Turner, and a remarkable $260 million for Cher. Those totals put them in pretty exclusive company, joining Kiss, Barbra Streisand, and Phil Collins as the only acts included in our survey to break the $50 million mark in terms of revenue generated on a farewell tour. Elton John just began his own multi-year retirement tour, however, and it is predicted that he will take the top spot on this list when all is said and done with an estimated $400 million in revenue expected to come out of his Farewell Yellow Brick Road tour.

On The Road Again

Sometimes the itch to get back on the road proves too great for bands that have announced their retirements, leading them to take up touring again. Sometimes that return to the road lasts longer than the the pre-retirement stretch. Such is the case for the artists profiled above, led by Elton John, who first retired in 1977 after 14 years as a performer before returning to the tour life in 1979. While he is in the midst of a massive international retirement tour at the moment, the 39 years he spent on tour after his first retirement is more than double the length of his first run. 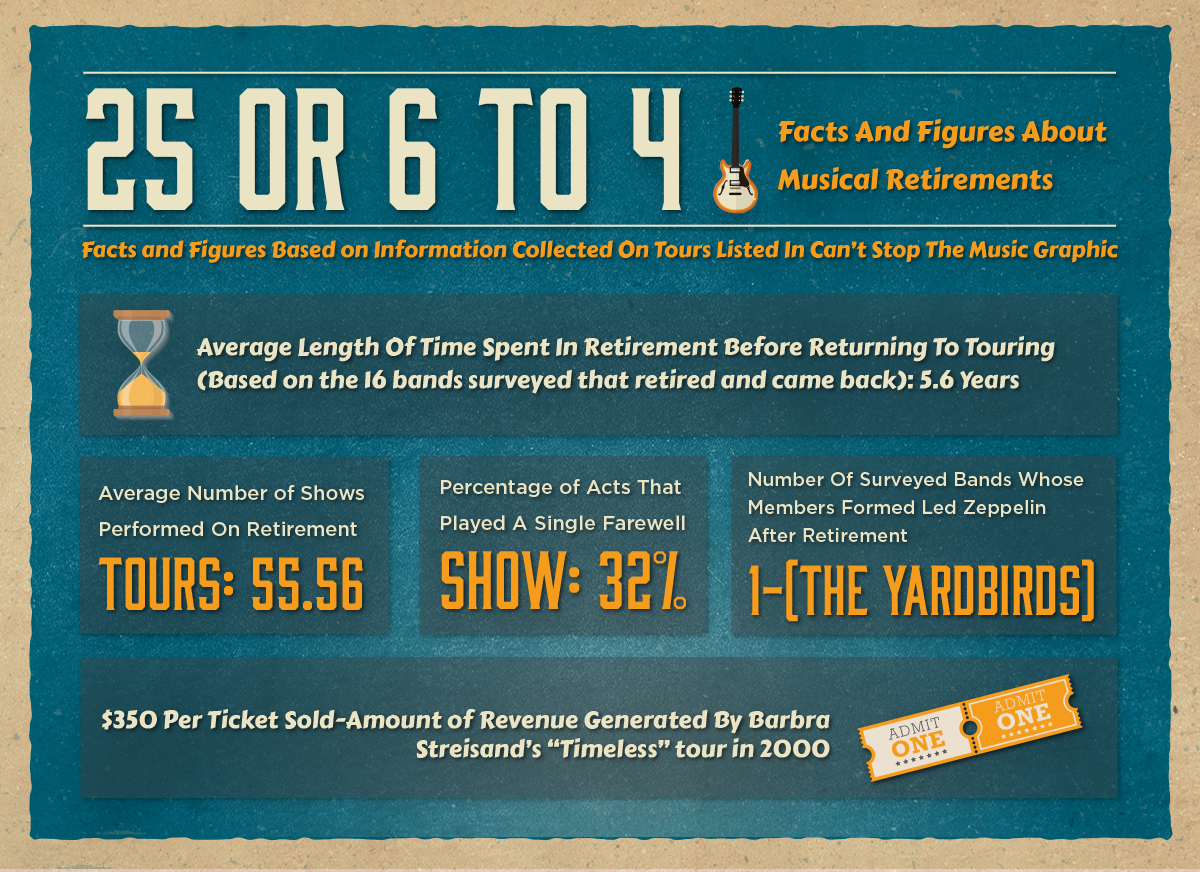 Those bands listed above aren’t the only ones we surveyed that returned to touring after retirement, just the ones that did so the longest. All told, two-thirds of the 24 artists we examined came back to regularly performing on the road, spending an average of 5.6 years in retirement before the desire to perform again became too great to ignore.

While nearly a third of the acts we examined played a single farewell show before calling it quits, the rest had long enough goodbyes to bring the average number of shows played on a retirement tour to over 55. That’s plenty of time for some last hurrahs!

These artists spent their careers entertaining millions of fans around the world, and they made sure to enter retirement with a bang. While these performers have (mostly) called it quits for good, some other legendary acts still have a few songs left in them, so don’t miss out on catching them live before it’s too late!

Topics in This Article